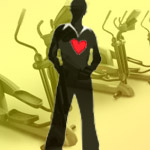 A recent study from the American Heart Foundation has found that too much sitting increases the risk of heart disease in men, even if they exercise regularly. The research showed that physical activity alone was not enough to guarantee a healthy heart but that reducing sedentary periods, such as sitting in front of the television or a computer, was also essential.

The study, led by Deborah Rohm Young PH.D, is the first to examine the relationship between the risk of heart failure and sedentary time. Commenting on the study, Young said that the key message to be taken from the research was to “be more active and sit less.”

Young’s research team followed 84, 170 racially diverse men between the age of 45 and 69 who had no previous history of heart failure. After almost eight years of monitoring the men, they found that preventing heart failure requires a two things; high levels of physical activity and low levels of sedentary behaviour.

Of the men in the research, those with low levels of physical activity were 52% more likely to suffer heart failure than those with high physical activity levels. Men who spent five or more hours being sedentary outside of work were 34% more likely to suffer heart failure than men who sat for no more than two hours a day and the risk of heart failure more the doubled for those men who sat for five hours a day and didn’t exercise compared to those men who were physically active and only sat for two hours a day.

The Irish Heart Foundation recommends a minimum of 30 minutes exercise 5 days a week to protect against heart disease and says that over 20% of coronary heart disease is due to physical inactivity. Suggested activities to ensure a healthy heart include walking, cycling, gardening, dancing, tennis and anything else that uses the heart, lungs and large muscles over a period of time.