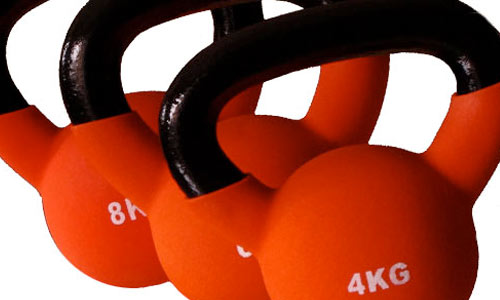 What is a kettlebell? To put it simply – a cannonball with a handle! This cast-iron weight has taken Ireland by storm in recent years and people are falling in love with the workout it gives.

The kettlebell is used to perform ballistic exercises that combine cardiovascular, strength and flexibility training. Most of us who have ventured into the ‘Gym-World’ are accustomed to the traditional dumbbells. However, the kettlebell’s centre of mass is extended beyond the hand. This facilitates the swinging movements. By their nature, typical kettlebell exercises build strength and endurance, particularly in the lower back, legs, and shoulders, and increase grip strength. The basic movements, such as the swing, snatch, and the clean and jerk, engage the entire body at once, and in a way that mimics real world activities such as shovelling or farm work; activities that a lot us are not familiar with in our world of convenience and mechanisation. Kettlebell lifting is still relatively new in The West, though it has been practised in Eastern Europe and Russia possibly back as far as 1704. This exercise weight is taking us back to basics – and sometimes it is basics that actually work!

Unlike the exercises with dumbbells or barbells, kettlebell exercises often involve large numbers of repetitions. Kettlebell exercises are in nature holistic; therefore they work several muscles simultaneously and may be repeated continuously for several minutes or with short breaks. This combination makes the exercise partially aerobic and more similar to High-intensity interval training rather than to traditional weight lifting. In one study, kettlebell enthusiasts performing a 20 minute snatch workout were measured to burn, on average, 13.6 calories/minute aerobically and 6.6 calories/minute anaerobically during the entire workout – equivalent to running a 6-minute mile pace. Some kettlebell classes claim that an hours class will burn up to 1200 calories per hour compared with 300-400 calories an hour for normal weightlifting or an aerobics class. Ideal for those who struggle to use up the calories they consume.

If you are thinking of investing in a piece of home-gym equipment, this is one piece of equipment that will train the whole body. However, when working out at home, you always have to be aware of possible injuries and other safety measures to take.

As they say, ‘No Pain, No Gain’. So, If you want that fit healthy body – well, be prepared to work for it. If you do join a kettlebell class, don’t be put off by some of the movements. Most dreaded is the Turkish get-up. Some even say it is literally torture! You sit on the ground with your legs tucked under you, and then scramble up, one hand raised above your head holding the kettlebell. This doesn’t sound too bad until you’re told you can’t use your spare hand to push yourself up for balance. But, who minds a bit of torture – if that torture works!

If you do take up the kettlebell – you will be joining the likes of Penelope Cruz, Jessica Biel, Matthew McConaughey and our own TV presenter Blathnaid Ni Chofaigh. A growing number of sports clubs, including GAA, soccer and rugby, are incorporating kettlebell routines into their training. So ‘put the kettle on’ – finally, there is a class where ladies are quickly dropping dress sizes and men are boasting the body of Mattew McConaughey.

If you are interested in taking up the kettlebell, contact your local gym for further information. There are a range of classes listed on Gyms.ie at – https://www.gyms.ie/fitness-class/kettlebells/