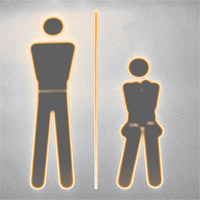 You get up in the morning. You sit into you car. You arrive at work. You sit into your desk. You get home in the evening. You chill out on the couch. Bedtime comes. You never got a chance to exercise… If this routine sounds familiar to you, then do yourself a favour and calculate just how many hours in a day you spend sitting down. Because your sedentary lifestyle could be shortening your life. The Guardians US News Blog have stated that experts have stated – sitting down for more than three hours per day can cut up to two years off your life.

And this new finding isn’t even about exercise. This is simply about not being sedentary. Standing up. Moving around. Letting your legs do a little bit of work. In The New York Times Gretchen Reynolds describes an experiment that took place at the University of Massachusetts, whereby a group of healthy young men were given a platform shoe to wear on one foot and a pair of crutches to use, leaving one leg completely sedentary as they moved around, never allowing that leg to touch the ground or use its muscles.

After two days the scientists completed biopsies on the two legs and found very different gene activity in the active leg versus the sedentary one. After only 48 hours the ‘gene activity in the [sedentary] leg suggested that DNA repair systems had been disrupted, insulin response was dropping, oxidative stress was rising, and metabolic activity within individual muscle cells was slowing…’ If you have ever broken your leg and spent six weeks in a cast, then you can vouch that this fact is true. In an experiment completed on animals where they placed casts on their back legs, they showed similar results and also that afterwards the animals ‘produced substantially less of an enzyme that dissolves fat in the bloodstream.’

So it’s not just over eating that can make you fat. Simply sitting down too much can do it too. In another experiment the National Cancer Institute monitored eight years of the lives of a group of American adults who at the start of the study were not suffering from diabetes, cancer or heart disease. After eight years the sick and deceased of the group were ‘in most cases, sedentary’. An Australian study suggested that a person who does not watch television will live on average a year and a half longer than a person who watches television regularly.

What is important to note is that regular exercise only slightly lessens the risk factors for the sedentary. If you exercise for one hour per day but spend the rest of your day sitting then you are still considered to be leading a sedentary lifestyle. It’s about regular movement, little and often. A further study at the University of Massachusetts showed that simply standing as opposed to sitting all day burned hundreds of more calories. Not jogging or walking, simply standing.

So. If you work in an office then break up each hour with two minutes of movement. If you drive or take the bus to work then park two minutes further away or get off at a bus stop two minutes down the road. Take a five minute stroll at lunch. If you like to watch television in the evenings then give yourself a daily limit. If you are watching TV or working on the computer for more than two hours in the evening then break it up with a little exercise. A couple of repetitions on the stairs or perhaps if you have a mini-trampoline you could spend two minutes on it every hour. Use your imagination, it doesn’t need to be costly. It’s not necessarily about exertion, its about simple movements, to remind your body that it is a moving, living thing, and also quite possibly to increase your quality and length of life!