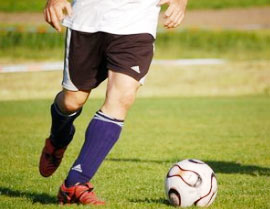 Ever feel that football would be just the thing for you if it wasn’t for all that exertion and running about. If so you’re probably just lazy. If on the other hand you are over 50 and no longer able to compete in the sport that you used to love, then walking football (also known as ‘Danderball’) could be the score you’re looking for.

A recent feature on the Mens Health Forum in Ireland (www.mhfi.ie) featured an information piece on walking football or Danderball. The piece contained information taken from the original Danderball inventors – Chesterfield FC in England. Danderball is aimed at being a social, fitness/sport Initiative for men aged 50 years and over. The programme is designed to compliment other physical activities for people aged 50 years plus in the local area and would be particularly attractive for men who can no longer play standard football.

The guidelines offered for those planning and delivering Walking Football sessions are as follows;

The Playing Surface: Danderball sessions can be delivered on any surface but it is recommended that if it is possible to hire a facility with a 3g all-weather pitch. This type of surface is much easier on the participant’s joints and will ensure that they will be able to play for longer than they would on e.g. a tarmac surface.

Breaks/Time outs/Drinks: When planning sessions ensure that there is plenty of time put aside for breaks and timeouts so the participants can replenish fluid levels and get their breath back. It is important that the participants take on board lots of water.

Screening: It is advised that every participant that attends your Walking Football programme goes through a medical screening process. This will highlight any areas that may need questioning regarding the health of the participant or give the green light for them to attend the session. A simple questionnaire should be used to help the participant decide if they are fit enough to play. It should be the decision of the participant to play or not in most cases.

Easier or Harder: Depending on the group or individual player’s abilities the session may need to be more challenging for participants or perhaps made
easier. This can be done with careful session planning. As a coach, make sure you know the group’s/individual’s needs prior to planning.

Warm-Ups: Warm-ups must be thorough and last no more than 20 minutes; gradually progressing in difficulty as time goes on. It is important that
participant’s heart rates gradually increase as the warm-up progresses. Stretching is really important and should be thorough as elderly participants are at more risk of injuring themselves. Stretching should take place twice in the warm-up; after 10 minutes and at 20 minutes. This period should also be used for giving light health information, perhaps on alcohol, drugs (medication), obesity, healthy eating, men’s cancer prevention, etc.

Cool Down: The cool down is as important as the warm-up; 10 minutes at the end of each session should be spent on bringing down the heart rate and body
temperature. Stretching is a very important part of the cool down. This makes sure that participants don’t become stiff after the session and helps to aid flexibility.

Rules for the game are as follows..